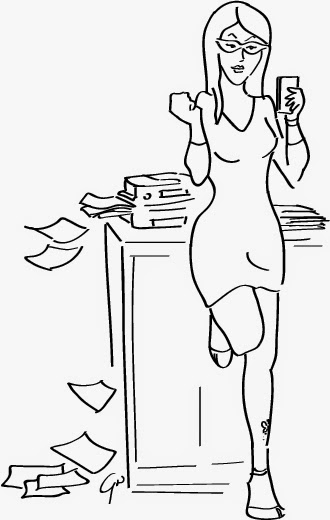 Comrade Carl Marks, acting CEO, mailed out a link to all our staff about a CEO who has just "resigned "because she wanted to create a Disneyland type culture, at the same time as her organization was going "belly up", as my late Dad Pierre Elliot used to say.

Comrade Carl noted that the aforementioned CEO has an HR background:
"Isn't this pattern all too familiar to us", wrote Comrade Carl, "HR fiddles and fuddles with sloganeering, hiding its impotence behind grotesque verbiage? What value does Gloria and her mediocre crew bring us? Should we not smash the HR organization into smithereens, kibinimat? Our new product is a pearl and HR has not drummed up enough support of our innovation at the client base."

Ms Cynthia Axe rushed into my room with the email:
"Gloria, Comrade Carl may have alluded to HR in a non wow manner".
Ms Axe is a drama queen, with no stomach for politics.

Almost at the very same moment, the white heterosexual Diversity Chief, Hugh White,
forwarded me Comrade Carl's email, with his comments: "Gloria, what does this email of CCM mean from a Diversity perspective? Should we panic? Hugh
CCM stands for Comrade Carl Marks (GR)

Unlike my spineless staff, I stayed cool under fire. Comrade Carl is a non-person, in my book. And my book is not written by Herta Muller.

Since Carl is acting CEO only till October 8th, my reply to him was crisp and clear.

My dear and precious Comrade Carl,
Thank you for contacting me. I appreciate your email and I will make it a top priority to get back to you with an answer based on big data and intuition.
I am presently in an intensive program to learn to understand English with a  Russian accent, so I will be answering you around Oct 8th.
By the way, have you read the tedious and punishing book The Land of the Green Plums by a certain Herta Muller, that Wifey asked that we all read it in order to become more esoteric and obtuse.
I do not understand one word of that "maudit" book, nor does Ms Axe or Hugh White, who is quite the intellectual.
Give me your mission-critical and wise input on this Nobel winning author, which appears to be harder to grasp than our struggling yet highly innovative product.
You are my man, Comrade Carl. (Valid till Oct 8th, 6pm)
Gloria

Comrade Carl Marks, our Chief Nerd, brought me up to speed about his plans for Mental Health Day. "Gloria", Carl bellowed,"...