A round table well managed with the Blockchain bums


Today CEO Stan had a round table with a sample of nerds from the Blockchain Division, which has released a currency in the embryonic phase.

HR set the stage for the success of the round table. Ms Cynthia Axe, the "Early Bird Retirement" Program Manager, was sent to Turkmenistan (which is not in Turkey) on business and thus not on site, which raised morale.

I "aligned" the level of food and goodies for the occasion, as per budgetary guidelines/discretional/roundtable/HR-Stan.

CEO Stan wore a stunning blue shirt and was at his best, smiling as if he had slept with a hanger in his mouth all night.

I prepped the participants so that the discussion would be constructive, mentioning in passing that the bonuses are to be distributed in a month. I also mentioned that corporate communications was asked to tape the session, so we can do a lessons learned, to be carried out by a cost effective, compliant vendor.

The round table was scheduled to begin at 0900 and Stan took an urgent client call, related to the deployment of our embryonic  currency. The call lasted till 1000. So we had half an hour left....which was well used.

I led by personal example and asked Stan how he creates work life balance so successfully. He told us that "multi-tasking" is the basis of on which we thrive. He also told us of the need to "manage his family's expectations".
I noticed quite a few people taking notes and texting in foreign languages.

Time was up-it was a wow experience.

Young Hugh White: White as a Lily Taking the law into his own hands, Hugh White, "diversity ... 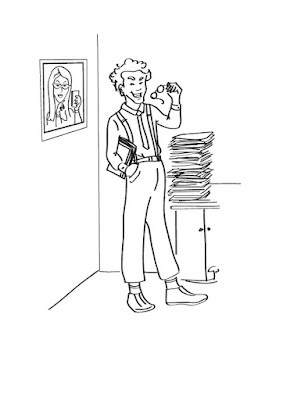